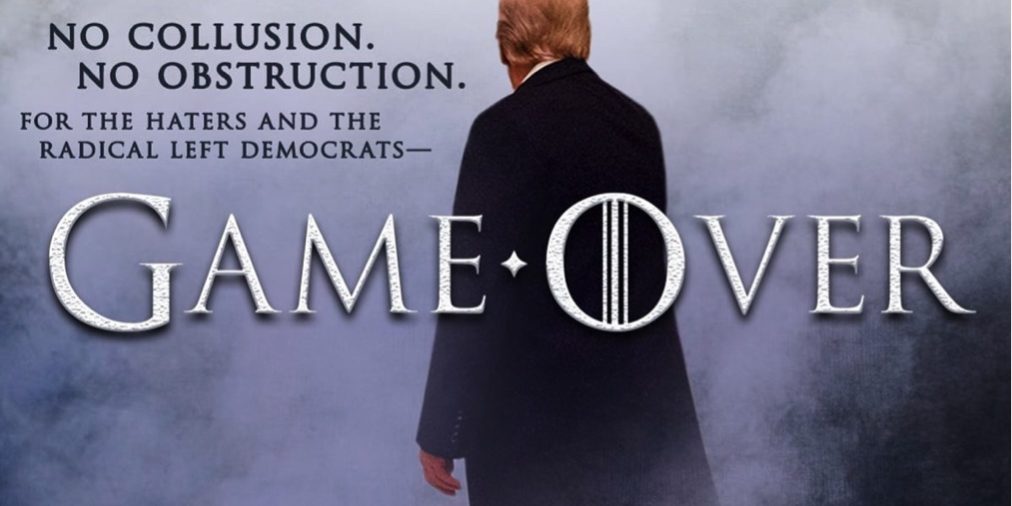 Donald Trump must love HBO’s “Game of Thrones.” While the avid tweeter has not chimed in on the show’s Season 8 premiere, it’s clear that he associates the popular TV show with a sense of supremacy that can be utilized to promote powerful messaging. However, the feeling doesn’t appear mutual. On the heels of the release of Robert Mueller’s highly anticipated report, Donald Trump released the above image to support his claim of exoneration. Though he may feel he has bypassed one hurdle of his presidency, he may be potentially subjecting himself to another – violation of 15 U.S.C. § 1125, also known as the “Lanham Act.”

Does HBO Have a Claim?

The Lanham Act is the federal law that provides various causes of action for the protection of a party’s trademark. Section (a) of the act states any person who, on or in connection with any goods or services, uses in commerce any word, term, name, symbol, or device, that is likely to cause confusion, mistake, or deceive as to origin or sponsorship of another’s goods and services may be held liable by any person who believes he will be damaged by such act. Here, Trump is not selling goods or services, but rather promoting his own innocence. Furthermore, while HBO may claim he is misappropriating its symbols (i.e. lettering and imagery linked to the show), it would be extremely difficult to allege damage to a program sure to break a number of records in its final season, as HBO would struggle to claim that it is losing viewership because of the president’s use of its intellectual property.

An alternative claim could be trademark dilution, which owners may use to prevent (i) attacks to the distinctiveness of its famous marks, or (ii) use that may tarnish the mark’s reputation. However, this claim is also premised on association and it may prove challenging for HBO to claim the public wrongfully associated the president’s tweet with the show, especially when the company has already responded outright refuting any connection or affiliation between the two.

Even if HBO elected to bring a case, while not an outright defense, declaring his tweet is a “parody” – i.e., transformative for the purpose of humor or social commentary – most likely would protect Trump from an adverse ruling. Parodies are a form of artistic expression protected by the First Amendment, and intent to “parody” helps lessen likelihood of confusion. This is highlighted in Louis Vuitton Malletier, S.A. v. Haute Diggity Dog, LLC 1, in which the court determined a pet company’s use of CHEWY VUITON to sell pet products (also styled after “Louis Vuitton” products but with a pet-themed twist) was not likely to impair the distinctiveness of the “Louis Vuitton” brand.

Thus, it appears Trump has a right to express himself through “GoT” themed messaging, and based on recent history, it would be a surprise if this belief had not already been shared throughout the White House. Trump has coupled his agenda and admiration for the show through the spreading of other memes, and until his infatuation with the show is taken by another, it can be assumed more are sure to come.