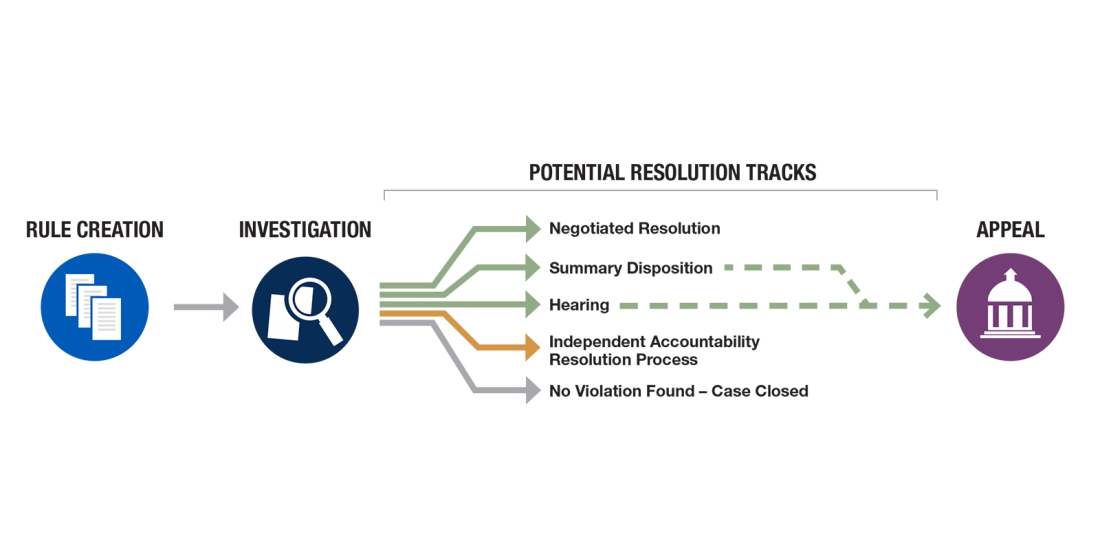 The NCAA has formed an independent investigation unit to oversee “complex cases.” Only a school representative, NCAA enforcement staff, or member of the NCAA Division I Committee on Infractions can bring a case under the new investigation process. What is the unit’s purpose and how does it plan to effect change?

The unit is broken up into four committees:

Complex Case Unit (CCU): carries out factual investigations regarding approved complex cases and guides the case through the review process. The Complex Case Unit is made of independent investigators and advocates with no school or conference affiliations and various NCAA enforcement staff.

Independent Resolutions Panel (IRP): reviews Complex Case Unit findings and the school’s response, oversees case hearings, and determines penalties. This group consists of fifteen members with legal, higher education, and/or sports backgrounds, and who have no affiliation with any NCAA school or conference. A rotating panel of five members hears each case. All decisions are final and not subject to appeal.

The Independent Accountability Resolution Process (IARP) was created upon the recommendation of the Condeleeza Rice Commission to fix college basketball. Its main purpose is to defeat perceived conflicts of interest. However, the IAOC is made entirely of NCAA officials who determine the other members of the unit. Furthermore, the NCAA decides what qualifies as a complex case. If the NCAA truly wanted to promote independence, it would have been better served outsourcing the entire process instead of tethering it to its brand.

The IARP also fails to include methods to protect student-athletes. Noticeably, student-athletes have no right to request a hearing. There’s no mention of how mitigating factors or the effects of institutional control may affect an investigation. It appears the “why” and “how” of a situation is irrelevant in analyzing a case. Strict decision-making may be effective to govern administrations, but a number of variables come in to play when teenagers are involved. The IARP fails to take such factors into consideration.

The IARP is No Different Than Current NCAA Policy

The NCAA already has the NCAA Infractions Program, which was designed to “uphold integrity and fair play among the NCAA membership, and to prescribe appropriate and fair penalties if violations occur.” Like the IARP, the Infractions Program requires decisions to be made by a panel of independent arbiters. Specifically, Section 19.3.4 of the NCAA Division I Manual states:

No member of a hearing panel shall participate in a case if he or she is directly connected with an institution under investigation or if he or she has a personal, professional or institutional affiliation that may create the appearance of partiality. It is the responsibility of the panel member to remove himself or herself if a conflict exists. Objections to the participation of a panel member in a particular case should be raised as soon as recognized but will not be considered unless raised at least one week in advance of the panel’s review of the case. Objections will be decided by the committee chair.

One of the unit’s first cases may be the investigation of corruption in college basketball. But it’s odd that the NCAA would create a new committee just for this purpose. What more is there to learn from this subject outside what the federal cases already provided?

The investigation unit is the latest in a string of new committees put in place to advance the administration. In May, the NCAA formed the NCAA Board of Governors Federal and State Legislation Working Group to analyze proposed federal and state legislation focused on student-athletes receiving benefits based on the use of their name, image, and likeness. The thought was this group would bring the NCAA into the 21st century. Instead, the NCAA has spent the past months challenging California legislation and threatening schools. Until more transparency is provided, the IARP appears simply another measure meant to provide hope that will ultimately fail to make a significant impact on the landscape of college sports.

Are Group Licensing Benefits Making Its Way To The NCAA?
May 17, 2019